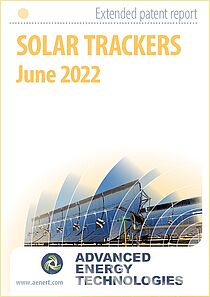 Owing to its rapid development rates solar energy stands out from the variety of renewable energy types. First of all, this relates to photovoltaic technologies, whose industrial implementation volumes substantially outweigh that of concentrating solar energy. Scientific research and engineering developments conducted during the last decades made possible efficient technologies of solar energy conversion into electric and heat energy, which, in turn, made it economically viable. Nevertheless, further development of solar power technologies capable of ensuring a pronounced transition from extensive to intensive level raises a lot of questions.

One of the options to substantially increase the efficiency of solar technologies is the implementation of trackers, devices that follow the solar position and correspondingly orient photovoltaic panels or mirror reflectors. There is a multi-level classification of trackers based on their functional capabilities. First of all, passive and active trackers can be distinguished. In the latter case special actuating mechanisms such as electric motors or hydraulic devices are used for mechanical movement of solar elements. Another important classification feature of trackers is the number of axes around which the adjustment can be performed. Here, main options are Single Axis Tracking and Dual Axis Tracking. In detailed sources more specific tracker features are additionally mentioned, for instance, Horizontal Single Axis Trackers or Azimuth-Altitude Dual Axis Trackers.

Employment of solar trackers is an indispensable condition for concentrating solar energy technologies. In this case it is the precise adjustment of parabolic or flat heliostats and concentrated energy receivers towards the sun that ensures the performance of solar power stations of this type in principle. In the last years the employment of solar trackers is being extended in photovoltaic applications as well. According to a number of economic and technological studies, employment of Single Axis Trackers allows the efficiency of solar energy conversion to be increased up to 25% and even to 35%, while for Dual Axis Tracking – up to 40%. In addition, for solar tracker market a yearly average growth of 13-16% is forecasted in the nearest future. A specific kind of solar trackers, floating solar systems, is being developed at considerably higher rates, especially in China. Currently, there are several large manufacturers of solar trackers on the market, having many years of positive operational experience and whose supply rates of various tracking devices amount to hundreds or even thousands. Among them the following should be highlighted: AllEarth Renewables, Array Technologies, Inc., First Solar, Inc., and DEGERenergie GmbH.

However, use of solar trackers in photovoltaic applications is controversial. Main deterrents here are their high costs and additional maintenance expenses. Solar tracking systems and, particularly, actuating mechanisms are complex and vulnerable structures that require regular maintenance by trained personnel. Often, implementation of trackers can double the cost of solar power plant, thus neutralizing the additional benefits of increased solar generation efficiency. Therefore, presently the use of trackers in the solar power industry is limited, excluding, as mentioned above, concentrating solar power facilities.

Overcoming this barrier in the majority of cases comes down to raising the organizational level of solar power plant management and engineering improvement of solar tracker design. A significant part of effective technical solutions aimed at the development of these technologies is concentrated in patent documents registered with various patent offices. EnerTechUp company performed a systematic search of patent documents on this subject, prepared a unique patent database, and conducted a thorough statistical analysis of the patenting activity results. The database includes about 8 thousand patent documents published in generally-accessible sources all over the world during 1994 and 2021. Statistical analysis of patent documents was performed for a twenty-year period between 2002 and 2021. Results of the statistical analysis are generalized and provided in the patent review.

The patent database "Solar Trackers" contains a structured set of data in Excel format for patent documents related to the subject of interest covering a time period from 1994 to 2021. Placing a patent document database in a file with an xlsx extension makes it possible to form individual selections of documents or sort them by selected parameters with the help of the in-built tools of Microsoft Office Excel. The annexed manual describes the major options of managing patent documents in the database and corresponds to the functionality of the English-language version of Microsoft Office Excel 2016. A full-text description or at least an abstract for patent documents included in the database can be found by document number in publicly-available patent search engines, for example, Google Patents.

The database was formed in two phases. The first phase included a preliminary collection of patent documents from generally-accessible sources by using conventional methods involving key-words, patent classification indices, applicant and inventor data. During the second phase, to improve the correspondence of inventions to the chosen criteria, the text of all core documents from those, preliminary collected in the first phase were subjected to a thorough subject- and semantic-oriented assessment by experienced engineering personnel. Also, each document in the final version of the database was marked with additional topical indices allowing an in-depth systematization of the inventions.

Opting for such a labour-intensive way to produce a patent database was caused by the fact that subject-oriented search and systematization of inventions are associated with substantial difficulties of technical, linguistic, and methodological nature. Fairly often patent documents have complicated narrative style or imperfect translation, which hampers understanding and unambiguous interpretation. Incompleteness and imperfection of patent classification indices also exist. Moreover, in a number of inventions, main specific keywords are either omitted or used in a completely different semantic meaning.

Each patent document in this database contains a list of conventional bibliographical indicators, including original title, English version of the title, family size, application date, publication date, patenting office, names of inventors and applicants, document kind (patent or application), number of claims, number of citing, IPC indices, and core document number. Also, as it was mentioned above, patent documents were additionally provided with specialized markers – generalized unified indicators that are combined in individual semantic groups: technology categories (indicate the applicability of technical solutions to one of the solar energy technologies); technology elements (indicators showing a level of detailing for the production process); problems (technical, economical, ecological and other problems); type of technical solution (device, method, composition).

Besides, the database contains a number of derived indicators, including applicant statuses, the residence of applicants, and Unified Indicator Group. Indicators such as patent pending period, prominent patents, applicant's share in the aggregate intellectual property registry can be calculated based on the available data. For a vast majority of patent documents rating points were also calculated on the basis of bibliographical and unified indicators.

General methodology of patent database compilation and statistical evaluation used in this product can be found at aenert.com.

In total, 975 individual IPC subgroups that were assigned 17542 times, and 2861 groups of identical unified indicators were identified in the patent database under consideration. Among IPC subgroups the most popular were H02S20/32 (Supporting structures for PV modules/specially adapted for solar tracking), F24J2/38 (Use of solar heat, e.g. solar heat collectors/employing tracking means), F24J2/54 specially adapted for rotary movement), and G05D3/12 (Control of position or direction/using feedback).  Among patents and patent applications the popularity of IPC subgroups F24S30/425, F24S50/20, F24S20/30 has grown considerably. In patents and patent applications, the technological categories Concentrated Photovoltaic and Solar Tower were most often mentioned. In the majority of cases the authors indicated Low efficiency due to solar movement and High costs of equipment production as the problems the technical solutions disclosed in the patents and patent applications were aiming to solve. In the vast majority of cases, the inventions were related to devices or methods.

A brief analysis of statistical indicators is provided in a patent information bulletin, which can be downloaded here (license CC BY-SA 4.0):

Who needs this Extended Patent Report?

This Extended Patent Report (includes Database and Patent Review) serves as one of the variants to monitor advanced technical achievements in the specified industrial sector. The statistical data, rating evaluations and carefully selected patent documents provided in the Database can be of interest for inventors, engineers, researchers, students and educators, as well as for businessmen and investors, who in one way or another are concerned with the problems of the development of solar energy production technologies.

The present patent database and patent review were prepared by EnerTechUp company and its partners. The extended patent report includes patent documents that were carefully collected from the publicly available sources and, according to the authors, to the greatest degree represent the latest innovations in the particular energy industry as of the date of the extended patent report preparation. Detailed information on the methodology of search and processing of patent documents is available at Advanced Energy Technologies (www.aenert.com). Considering the difficulties related to the compilation of lists of international patent documents, including those related to time frames, national and terminological barriers, as well as taking into consideration high labour intensity of collecting the required analytical information and performing its qualitative interpretation, the authors of the patent database and patent review cannot guarantee absolute completeness and accuracy of the represented materials and disclaim any responsibility for the use thereof. EnerTechUp represents this material “as is” and rejects any claims and liabilities arising from the use of data published therein, including, but not limited to: compensation for any type of financial damage, lost profit or compensation for moral injury. These stipulations also refer to employees, shareholders, agents and data suppliers of EnerTechUp.