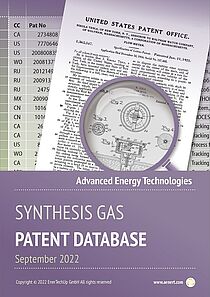 Synthesis gas or syngas, which is predominantly a mixture of H2 and CO, can be obtained from virtually any hydrocarbon or organic material, including natural gas, coal, biomass, or municipal waste. For the production of syngas, the feedstock is subjected to high-temperature methods of exposure, leading to the decomposition of complex molecules of organic substances to a mixture of elemental hydrogen and carbon monoxide. At the next stage, methanol and a number of its derivatives can be synthesized from them, which have a wide range of applications, primarily in the chemical industry. Fischer-Tropsch processes can produce high quality synthetic fuels. Syngas methanization provides syngas production as a substitute for natural gas. The leading players in this market are the English-Dutch Shell, South African Sasol, Canadian Methanex Corporation, Danish Haldor Topsoe, Japanese Toyo Technology Corporation, American Air Products, Lurgi Chemie GmbH, Linde plc, Air Liquide, and other companies.
Depending on the type of feedstock used, the syngas production processes with a subsequent synthesis of liquid fuel were named Gas to liquid (GTL), Coal to liquid (CTL), Biomass to liquid (BTL). Each of these technologies has its own fundamental distinctive features, which often doesn’t allow them to be addressed collectively. Nevertheless, each of them is based on syngas production, which implies the involvement of related processes.
The production of liquid fuels from natural gas is a long-established industrial process. This process is based on a two-stage technology for the production of syngas followed by its transformation into organic liquids using the Fischer-Tropsch method. In addition to meeting regional needs for liquid fuel, GTL technology allows regulating the supply of liquefied gas or, conversely, a set of liquid hydrocarbons, depending on the market situation. The largest plants, Pearl GTL and Oryx GTL, with a total capacity of 270,000 bpd, are located in Qatar, which has large natural gas reserves and is the largest producer of liquefied natural gas (LNG).
One scenario of implementing GTL technologies involves the use of specialized microchannel equipment. Microchannel technologies for the production of synthetic fuel are viewed primarily as the most promising options for the useful utilization of associated petroleum gas in oilfields. In contrast to large-capacity GTL technologies, which are widely used in practice, microchannel installations involve the assembly of metal sheets interleaved with channels for the main reactions and cooling.  Microchannel reactors are used to produce both synthesis gas and liquid hydrocarbons via the Fischer-Tropsch reaction. The main advantages of microchannel reactors are low-tonnage equipment, modularity (modular micro-GTL units), and the ability to use them directly in the fields.  The disadvantages include local use of the products, higher costs and energy costs, and difficulties in implementing the technology. At present, the large-scale production of microchannel units has not been established, and examples of the practical application of this technology are limited to demonstration projects. Therefore, most of the associated petroleum gas is still flared directly in the fields or re-injected into the reservoir.
Coal-to-liquid technologies enable producing high-quality synthetic fuel from coal, which is the cheapest type of fossil fuel. However, these technologies are characterized by low economic performance and environmental problems. Recent patents published in leading patent offices around the world address these issues. Among them, in particular, it is necessary to single out methods for the economical utilization of CO2, reducing water consumption, developing effective and affordable iron-based catalysts, improving oxygen production technologies, and applying rational methods for processing the final product.
Underground coal gasification is a kind of CTL technology where major high-temperature processes are performed directly in the coal beds, thus minimizing the costs related to expensive equipment and alleviating ecological impact.
The use of environmentally-friendly types of energy has led to an increased interest of modern society in various methods of renewable energy production, such as biomass gasification. Currently, there are several types of gasifiers used for biomass gasification. Some of the most common are counter-current fixed bed, where a fixed bed of carbonaceous fuel is treated using steam, oxygen or air which flows through it in counter-current configuration; co-current fixed bed, which employs a gasification agent gas that flows in a co-current configuration with the fuel; fluidized bed, where fuel undergoes fluidisation in oxygen and steam or air; or entrained flow, where feedstock is gasified with oxygen or air in a co-current flow. A great variety of different biomass and waste-derived feedstocks are suitable for this process, including wood chips, waste wood, agricultural wastes, switch grass, and crop-related residues. This, however, can also cause problems because various feedstock needs various gasifier types and plant sizes. Different feedstock can also have different heating values and moisture content.
During gasification, tar formation is one of the biggest issues which cause, for example, equipment blocking, poor quality gas output and increased maintenance. Environmental issues surrounding biomass gasification include the emission of toxic gases, such as CO, Six, NOx.
The proposed database includes a collection of patents and patent applications disclosing various aspects of syngas production. Each patent document in the database is marked with special symbols allowing a required group of inventions to be sorted out from the entire array, depending on the user requirements. In addition to conventional indicators representing bibliographical data of a patent document (ID number, publication date, patenting office, names of authors and applicants, IPC indices, patent family data, etc.) the database provides technological indicators, representing, for instance, feedstock material kind (GTL, CTL, etc.), type of technological procedure (feedstock preparation, main process, microchannel technologies, treatment of product, etc.), problems the invention disclosed in a patent document is aiming to solve (high costs, low efficiency, etc.), and type of invention (method, device, composition). Also, for a vast majority of patent documents patent rating is calculated using original software.
The database includes more than 19500 patent documents published in generally-accessible sources all over the world during 1990 and 2022. General methodology of patent database compilation and statistical evaluation used in this product can be found at aenert.com.

In total, 6385 patents and 12294 patent applications were found for the present review. The most active registration of patent applications took place in 2014-2018. The most popular patent offices with applicants were USPTO (the United States), CNIPA (China), EPO and IP Australia (AU). Representatives of 57 countries around the world participated in the patenting process. The largest number of patents were granted to the residents of the United States, China, Germany, Japan, and France. The largest number of patent applications in the last five years were filed by the residents of China and the United States. The largest number of patents were issued to non-residents by USPTO (the United States), CNIPA (China), and EPO.
The share of non-residents among applicants decreased significantly towards the end of the time period under consideration. The number of applications to total number of documents by year were 0.61-0.52 in 2017-2021. At the same time, the number of start applications to total number of applications by year was on a high level (0.46-0.29 in 2017-2021). As of the end of 2021 more than 80% of patents were members of patent families (three and more patent documents). 12 patent families comprised more than 30 patent documents. Average patent pending time comprised 48-51 months in the last years.
In total, 2921 individual IPC subgroups that were assigned 65049 times and 2270 groups of identical unified indicators were identified in the patent database under consideration. Among IPC subgroups the most popular were C01B3/38 (Synthesis gas from hydrocarbons, using catalysts), C10J3/46 (Gasification of granular or pulverulent fuels in suspension), and C10J3/72 (Synthesis gas from hydrocarbons, other features). Among patents and patent applications the popularity of IPC subgroups C01B3/38 and C10J3/72 has grown considerably. In patents, three and more different IPC sections simultaneously were assigned to 413 documents (more than 6.4%). The annual number of new IPC subgroups assigned to patent documents has increased considerably in recent years.
In patents and patent applications, the technological categories Coal-to-liquids were most often mentioned. In the majority of cases the authors indicated Low efficiency of main processes and High OPEX / Maintenance as the problems the technical solutions disclosed in the patents and patent applications were aiming to solve. In the vast majority of cases, the inventions were related to devices or methods.

Air Products and Chemicals, Inc. (US)

The demo version presents the first hundred patent documents, as well as some of the statistical information.

Who needs this database?

The proposed patent database allows the existing trends in the intellectual property market of the specified industrial sector to be timely traced. The patent database is targeted at inventors, engineers, researchers, managers and business administrators involved in the development of syngas production technologies.

The present patent database was prepared by EnerTechUp company and its partners. The patent database includes patent documents that were carefully collected from the publicly available sources and, according to the authors, to the greatest degree represent the latest innovations in the particular energy industry as of the date of the patent database preparation. Detailed information on the methodology of search and processing of patent documents is available at Advanced Energy Technologies (www.aenert.com). Considering the difficulties related to the compilation of lists of international patent documents, including those related to time frames, national and terminological barriers, as well as taking into consideration high labour intensity of collecting the required analytical information and performing its qualitative interpretation, the authors of the patent database cannot guarantee absolute completeness and accuracy of the represented materials and disclaim any responsibility for the use thereof. EnerTechUp represents this material “as is” and rejects any claims and liabilities arising from the use of data published therein, including, but not limited to: compensation for any type of financial damage, lost profit or compensation for moral injury. These stipulations also refer to employees, shareholders, agents and data suppliers of EnerTechUp.

1.1 Breakdown of documents by publication date

1.2 Breakdown of documents by patent families

1.4 Breakdown of documents by patent offices

1.5 Countries participating in the patenting process, and the number of documents registered by their resident applicants

1.7 Breakdown of offices by non-resident applicants

1.8 Breakdown of documents by resident and non-resident

1.9 Breakdown of offices by applicant countries

2.6 List of patent documents by groups of identical unified indicators

2.8 Breakdown of documents by number of different IPC sections

2.9 Breakdown of documents by problems

2.10 Breakdown of documents by technology categories

2.11 Breakdown of documents by technology elements

3.4 Breakdown of applicants by offices

3.6 Breakdown of applicants by problems

3.7 Breakdown of applicants by technology categories

3.8 Breakdown of applicants by IPC sections

3.9 Breakdown of applicants by combinations of IPC sections