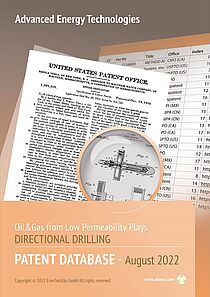 Presently, directional drilling is a commonly used technology for oil and gas production efficiency enhancement. Also, this technology has found applications in related fields of technology, for instance, in hard rock drilling for geothermal power production.
Directional drilling is usually described as the practice of controlling the direction and deviation of a wellbore to a predetermined underground target. Since the 1920s, the concept of directional drilling has basically remained the same: drilling wells at multiple angles to better reach and produce oil and gas reserves. Improvements in drilling sensors and global positioning technology have helped make huge advancements, such as better control of the angle of a drill bit through real-time technologies, which can increase efficiency and decrease costs. Tools used in the process include, for example, whipstocks, bottomhole assembly configurations, mud motors and specialized drill bits. The advantages of this technology are that a liquid-bearing fracture can be produced from a more beneficial angle, and that the same surface location is used for multiple wells. This reduces the total costs of drill site construction because only one access road is needed required, the rig can be erected within a short time, and only one disposal pit is needed.
There are three types of directional drilling, including extended-reach drilling, horizontal drilling, and multiple laterals off a single main well bore. Horizontal drilling with wellbores exceeding 80 degrees is used to drastically increase production. Using extended-reach drilling allows many wells to be completed from a single location and avoids the environmental impacts of multiple-surface structures. When hydrocarbon reserves are not thick but extend over a large lateral area, horizontal drilling is appropriate. Nowadays, most directional-well planning is performed on the computer using technologies, such as 3D visualization and 3D earth models to create and optimize well paths through reservoir targets.
However, directional wells present a number of drilling problems in addition to those encountered in vertical wells. These are related to factors such as the well profile and the reduced axial component of gravity acting along the borehole. As the angle of inclination increases, drilling problems become more severe. Also, the inability to consistently follow a prescribed well path and to hit the targets identified are counted among the more serious issues of directional drilling. Several directional-drilling-related environmental issues have come into the crosshairs of public discussion: water withdrawals on surface and groundwater supplies and on wetlands can, for example, negatively impact water quality and quantity for aquatic organisms. Accidental spills can contaminate soils. Waste and mud disposal can pose an additional challenge to the drilling industry.
A substantial part of effective technical solutions aimed at the development of these technologies is concentrated in patent documents registered with various patent offices. EnerTechUp company performed a systematic search of patent documents on this subject, prepared a unique patent database, and conducted a thorough statistical analysis of the patenting activity results.
All patent documents are labelled with specialized marking, allowing their grouping by semantic belonging, including sorting by patent offices, applicants, technological parameters, problems they are aiming to solve.
These original features of the database create unique opportunities for users of all levels to timely monitor the latest engineering achievements in the field of oil and gas production from low permeability plays, and to predict the development directions in the oil and gas industry as a whole, or for individual regions and companies.
Particularly, the data base allows lists of patent documents to be formed for the most popular technologies of directional drilling of underground formations, for instance, deflecting the direction of boreholes or correction of deflected boreholes, and for elements of equipment involved, such as special apparatus for deflecting the boring, waste utilization, etc.
The database includes almost 35 thousand patent documents published in generally-accessible sources all over the world during 1993 and 2022. General methodology of patent database compilation and statistical evaluation used in this product can be found at aenert.com.

In total, 32557 patent documents (11666 patents and 20891 patent applications) were found for the present review. The most active registration of patent applications took place in 2015-2019. The most popular patent offices with applicants were USPTO (the United States), CIPO (Canada), CNIPA (China), and IP Australia (AU). Representatives of 62 countries around the world participated in the patenting process. The largest number of patents were granted to the residents of the United States, China, Canada and the Netherlands. The largest number of patent applications in the last five years were filed by the residents of the United States and China. The largest number of patents were issued to non-residents by USPTO (the United States), CIPO (Canada), CNIPA (China), and IP Australia.
The share of non-residents among applicants decreased significantly towards the end of the time period under consideration. The number of applications to total number of documents by year were 0.69-0.58 in 2017-2020. At the same time, the number of start applications to total number of applications by year was on a high level (0.17-0.64 in 2017-2021). As of the end of 2021 more than 90% of patents were members of patent families (three and more patent documents). 29 patent families comprised more than 30 patent documents. Average patent pending time comprised 38-57 months in the last years.
In total, 2869 individual IPC subgroups that were assigned 98521 times and 1320 groups of identical unified indicators were identified in the patent database under consideration. Among IPC subgroups the most popular were E21B7/06 (Deflecting the direction of boreholes), E21B7/04 (Directional drilling), and E21B41/00 (Equipment or details not covered by groups E21B 15/00 - E21B 40/00). Among patents and patent applications the popularity of IPC subgroups E21B7/06, E21B7/04, and E21B 44/00 (Automatic control; Surveying or testing) has grown considerably. In patents, three and more different IPC sections simultaneously were assigned to 169 documents (more than 1%). The annual number of new IPC subgroups assigned to patent documents has increased considerably in recent years.
In patents and patent applications, the technological categories Directional drilling and Hydraulic fracturing were most often mentioned. In the majority of cases the authors indicated Low efficiency / Main processes and High OPEX / Repair and replacement as the problems the technical solutions disclosed in the patents and patent applications were aiming to solve. In the vast majority of cases, the inventions were related to devices or methods.

The demo version presents the first hundred patent documents, as well as some of the statistical information.

Who needs this database?

The proposed patent database allows the existing trends in the intellectual property market of the specified industrial sector to be timely traced. The patent database is targeted at inventors, engineers, researchers, managers and business administrators involved in the development of Oil & Gas production technologies from low permeability plays.

The present patent database was prepared by EnerTechUp company and its partners. The patent database includes patent documents that were carefully collected from the publicly available sources and, according to the authors, to the greatest degree represent the latest innovations in the particular energy industry as of the date of the patent database preparation. Detailed information on the methodology of search and processing of patent documents is available at Advanced Energy Technologies (www.aenert.com). Considering the difficulties related to the compilation of lists of international patent documents, including those related to time frames, national and terminological barriers, as well as taking into consideration high labour intensity of collecting the required analytical information and performing its qualitative interpretation, the authors of the patent database cannot guarantee absolute completeness and accuracy of the represented materials and disclaim any responsibility for the use thereof. EnerTechUp represents this material “as is” and rejects any claims and liabilities arising from the use of data published therein, including, but not limited to: compensation for any type of financial damage, lost profit or compensation for moral injury. These stipulations also refer to employees, shareholders, agents and data suppliers of EnerTechUp.

1.1 Breakdown of documents by publication date

1.2 Breakdown of documents by patent families

1.4 Breakdown of documents by patent offices

1.5 Countries participating in the patenting process, and the number of documents registered by their resident applicants

1.7 Breakdown of offices by non-resident applicants

1.8 Breakdown of documents by resident and non-resident

1.9 Breakdown of offices by applicant countries

2.6 List of patent documents by groups of identical unified indicators

2.8 Breakdown of documents by number of different IPC sections

2.9 Breakdown of documents by problems

2.10 Breakdown of documents by technology categories

2.11 Breakdown of documents by technology elements

3.4 Breakdown of applicants by offices

3.6 Breakdown of applicants by problems

3.7 Breakdown of applicants by technology categories

3.8 Breakdown of applicants by IPC sections

3.9 Breakdown of applicants by combinations of IPC sections

E21B7/06 - Deflecting the direction of boreholes