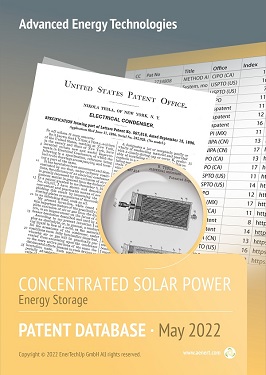 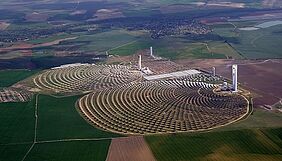 15 years ago, in March 2007, the first commercial solar power plant – PS10 (Planta Solar 10) – was put into operation in Sanlucar la Mayor near Andalusia, Spain. Although demonstration power plants with solar concentrators had already been built long before this date, the launch of PS10 marked the beginning of the large-scale development of this sector of solar energy. A tower-type solar power plant has several dozens or hundreds of rotating flat mirrors redirecting the sunrays to a receiver located on a high tower. In the case of PS10 the number of mirrors or heliostats is 624, each with an aperture area of 120 m. At the top of the tower, which is nearly 115 meters high, the sunrays concentrated in a small area heat the water in the receiver to a vaporous state. Then, according to the traditional scheme, the steam is fed into a steam turbine, which drives a generator that produces electricity. 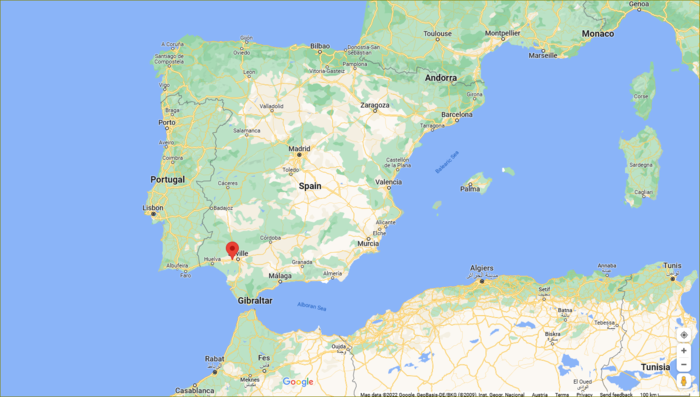 The total capacity of the PS10 station is 11 MW. Companies as Abengoa, Spain; Flabeg, Germany; Aalborg, Denmark; General Electric, USA participated in the development of the station. Later, a more powerful station PS20 (20 MW) of a similar design was built next to PS10, as well as three parabolic type stations, called Solnova, 50 MW each. 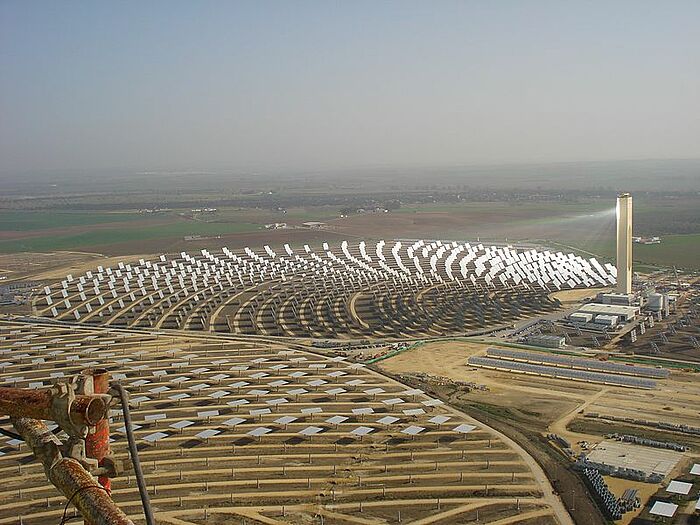 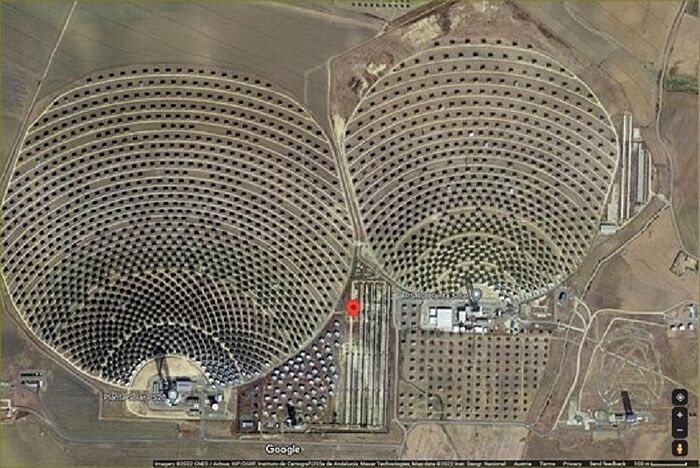 There are several different options for concentrating solar energy. The main ones are the Solar power tower and the Parabolic trough. In the first case, flat heliostats and a central receiver on a high tower are used, as in the case of the PS20 and PS10. In the second case, paraboloid-shaped curved mirrors concentrate the sunrays on tubular receivers located at the focus of the paraboloid. In this case, the receiver consists of an outer extremely transparent glass vacuum tube, inside of which a metal tube is placed through which a special working fluid circulates, most often oil or various salts. The working fluid, heated by sunlight to about 400oC, is fed to the steam generator through a network of piping, and then the superheated steam is sent to the turbine. 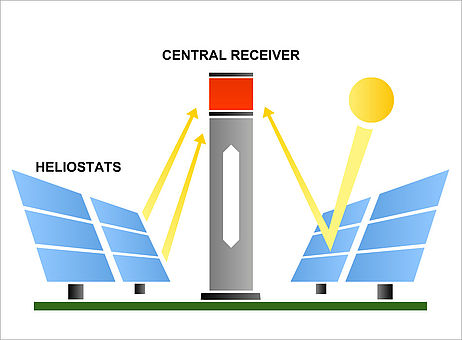 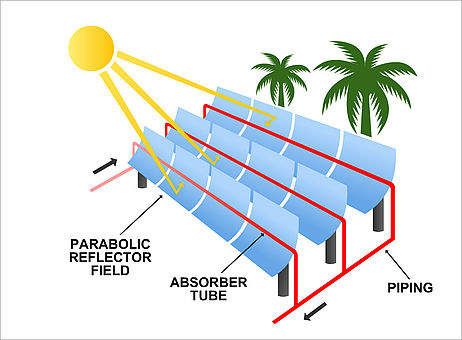 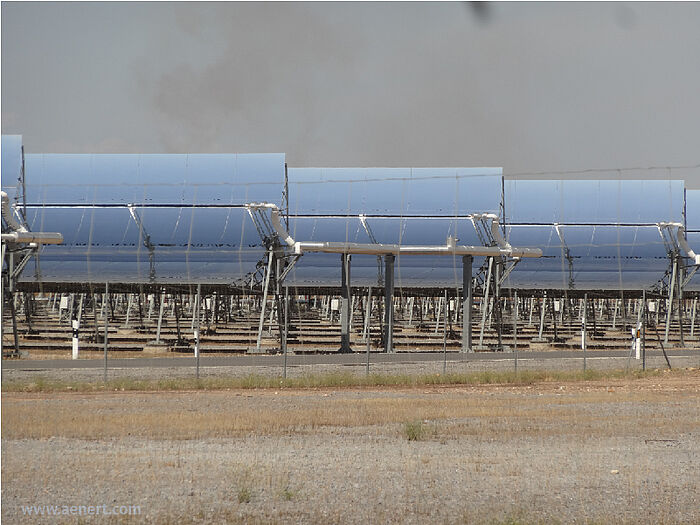 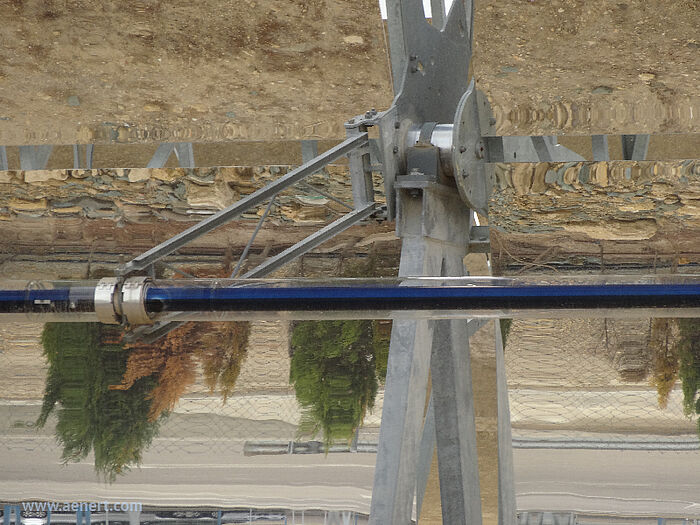 Both mentioned options for power stations with solar concentrators have their advantages and disadvantages. For the solar power tower, the most vulnerable point is the central receiver because if it is stopped for repair or maintenance, the entire station has to be turned off. Strong winds or unexpected gusts of wind can be a serious problem for accurate focusing of the fairly large flat heliostats. In addition, biaxial trackers in heliostats for tracking the sun are relatively expensive and not always reliable. The parabolic trough is essentially a modular design consisting of individual parabolic mirror units, which offers significant advantages, for example, when it has to be repaired. However, parabolic mirrors curved along a strictly fixed direction place high demands on their manufacturers and are significantly more expensive than flat ones. Long pipelines require good thermal insulation and high-quality connections. Today, more than 75% of all concentrating solar power stations in the world are parabolic.

Before we return our attention to the PS10 Solar Power Plant, let us about a closer look at Andalusia, because this is where the largest number of concentrating solar power plants in the world is situated.

Andalusia, located in the south of Spain, is one of the most attractive tourist regions in the world. Its unique geographical location, special climate with a lot of sunny days, varied landscape, original architecture, rich history of the region and preserved folk traditions create the special flair you experience when you visit there.

The Strait of Gibraltar 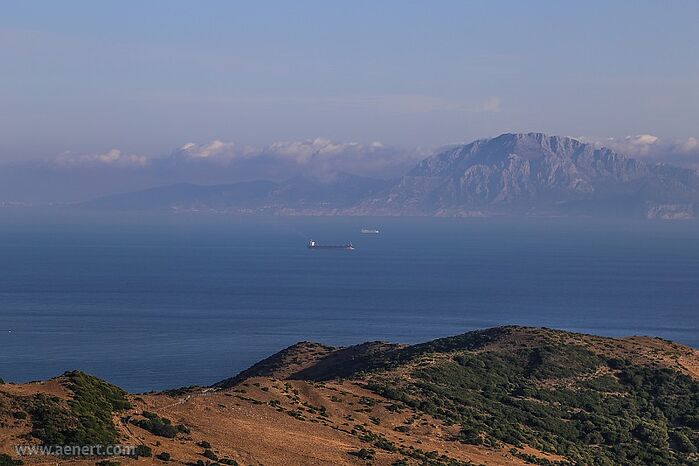 In this region the Greek, Roman, Arabic, Jewish and Christian heritage has created an extraordinary atmosphere of intermingling cultures, traditions and craftsmanship, unusual for other countries of old Europe, not to mention the younger nations of other regions and continents. Suffice it to say that already in the 10th century the Caliphate of Córdoba, which traded with all the Mediterranean countries as well as with Baghdad and Constantinople, experienced a fabulous development. 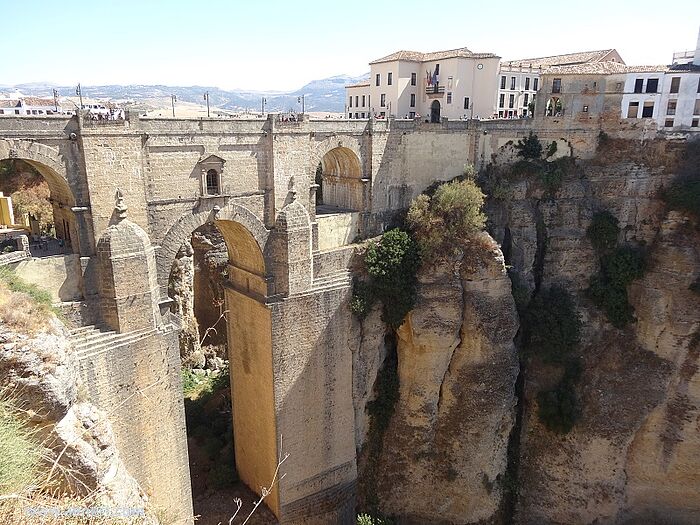 530 years ago in 1492, two events radically changed the way of life and the historical role of Andalusia. First, under the onslaught of Christians, the last Arab stronghold in Andalusia, The Emirate of Granada, collapsed, and a few months later Christopher Columbus set off from Huelva to look for new routes to India, but accidentally discovered America. Soon, an endless number of expeditions brought silver and gold, people and unusual crops to Spain, including potatoes, tobacco, peppers and tomatoes.

Reservoirs in the province of Malaga 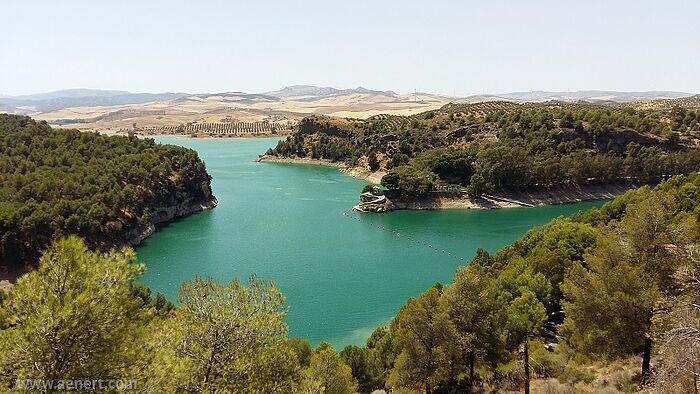 All of this contributed to Spain quickly becoming one of the richest countries in the world, and the capital of Andalusia, Seville, turned into a place of advanced thoughts and morals. Not without reason the adventures of Figaro from the play The Barber of Seville or the Useless of Precaution of Pierre Beaumarchais took place in Seville. In the second half of the 17th century, the growth of the Spanish empire stopped, and the country gradually lost its former influence, and the civil war in the last century added a further blow to the country's economy.

Bolonia, Province of Cadiz, ruins of the Roman town of Baelo Claudia 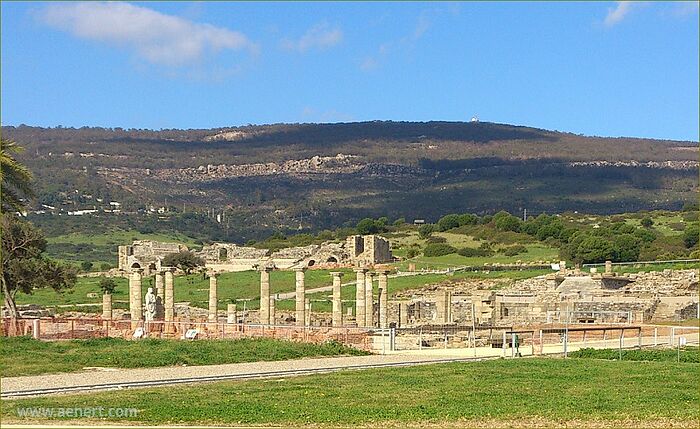 These features of Andalusia have largely predetermined its current economic situation. The main sectors here are agriculture, husbandry, forestry, and fishing. In the last two decades, the service sector has grown considerably. The industrial sector is represented mainly by mining and processing of agricultural products. Fossil fuel reserves, including oil, gas and coal, are insignificant in Andalusia. Therefore, the region is heavily dependent on importing energy resources. 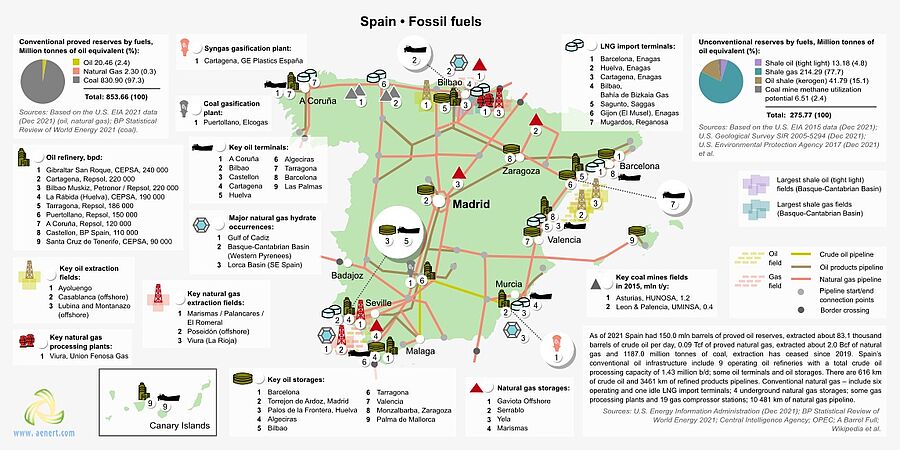 On the other hand, the south of Spain is characterized by excellent renewable resources, above all solar energy. In the area of Sanlucar la Mayor the annual level of direct normal irradiation is almost 2100 kWh/m2, and the number of sunny days per year reaches 320. For comparison, in the area of Rome, direct normal irradiation is just over 1700 kWh/m2, in northern Germany about 900 kWh/m2. 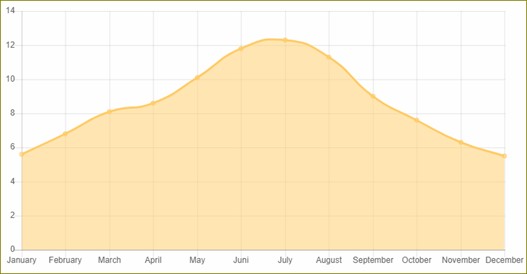 Source: Based on the data of the World Radiation Data Center (WRDC)

CLR - clear, SCT - scattered from 1/8 TO 4/8, BKN - broken from 5/8 TO 7/8, OVC - overcast, OBS - obscured, POB - partial obscuration
Source: Based on the data of the National Oceanic and Atmospheric Administration U.S.

This predetermined the intensive development of solar energy in Andalusia. Two fundamentally different technologies are used today to generate electricity – PV (photovoltaics) and CSP (concentrated solar power). In the first case, electric current is generated by free electrons when light photons hit the surface of special materials, most often silicon. In the second case, as described above, sunlight is concentrated by means of mirrors on a receiver with containing water, where steam is generated and directed to a turbine. Today it is obvious that the scale of distribution of photovoltaic stations is many times greater than that of CSP. Accordingly, photovoltaic plants produce electricity at lower prices. This is primarily the reason why no new CSPs have been built in Spain in recent years. It would seem that in the near future, PV plants will finally supersede CSPs. However, it is not all so clear-cut. In both cases, electricity cannot be generated at night in the absence of light. At the same time, many experts are now inclined to conclude that further intensive development of renewable energy without ensuring uninterrupted power generation will be difficult. 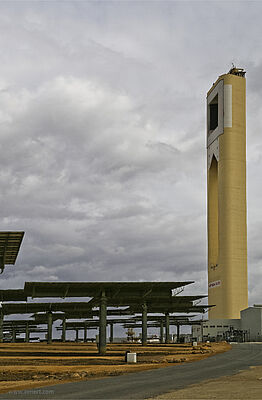 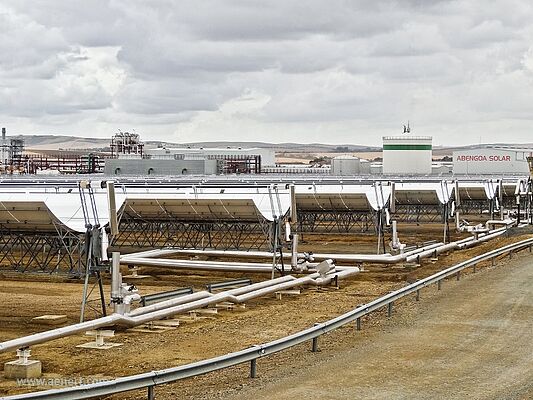 However, in the case of CSP, it is possible to use part of the solar energy during working hours to heat special liquids and store them in a heated state in thermally insulated containers. At night, the stored thermal energy can be used to generate steam and ensure the continued operation of the solar station. Today these systems have a storage capacity of up to 17.5 hours. In the future, this may ensure round-the-clock operation of CSP. The photovoltaic power stations lack this capability. Therefore, the widespread use of CSP with Thermal Energy Storage may be one of the most promising options for solving this problem. So far, the storage of large amounts of energy has only been possible with Hydro Pumped Storage, but this is expensive and not always feasible, especially in flat areas. According to the IEA, under the most optimistic scenarios of CSP development in the world, electricity generation based on this technology could reach 10% of the global level or over 4000 TWh, which is slightly less than the predicted figures for PV. This technology can be most widely used in such densely populated countries as India, China, as well as in the USA, Middle East, and North Africa.

Interestingly, it was the PS10 that used a small capacity, essentially a test pressurized superheated water storage unit, which allowed various process procedures to be performed at the plant for a dozen minutes without stopping power generation. Subsequent improvement of the storage systems led to a real breakthrough in this direction, which allowed to dramatically increase the capacity factor of CSP.

Layout of a solar power plant with an energy storage facility 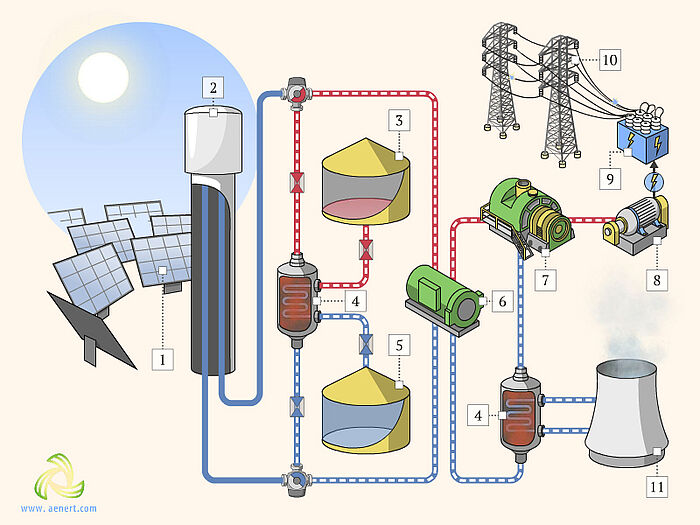 For example, the Gemasolar concentrated solar power plant launched ten years ago, located east of Seville in Fuentes de Andalucía, and used an advanced brine-based energy storage system with a maximum heating temperature of 565oC. This gave Gemasolar a capacity factor of 45.9%. The PS10 has a capacity factor of 24%. For PV stations, it varies from 10 to 21%. 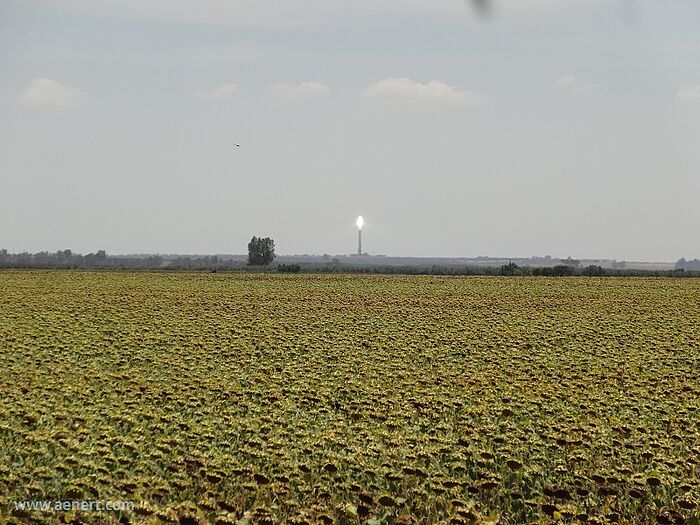 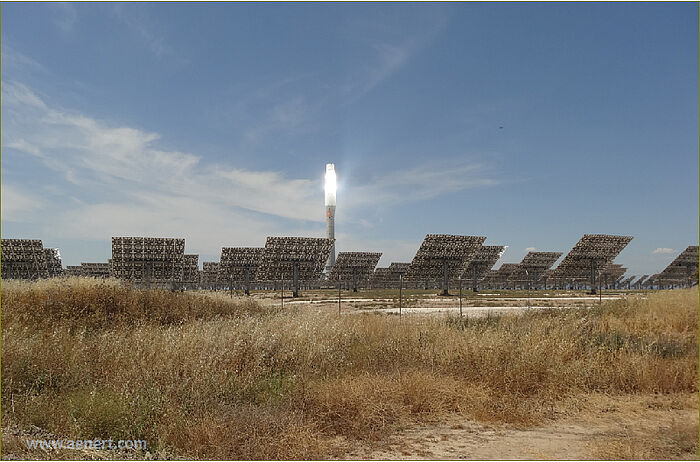 Another option to increase the efficiency of solar plants is to develop hybrid plants that include both CSP and PV, as well as CPV (concentrator photovoltaics) technology. At Sanlucar la Mayor, there is a test site next to PS10 with a set of CPV plants of various designs. 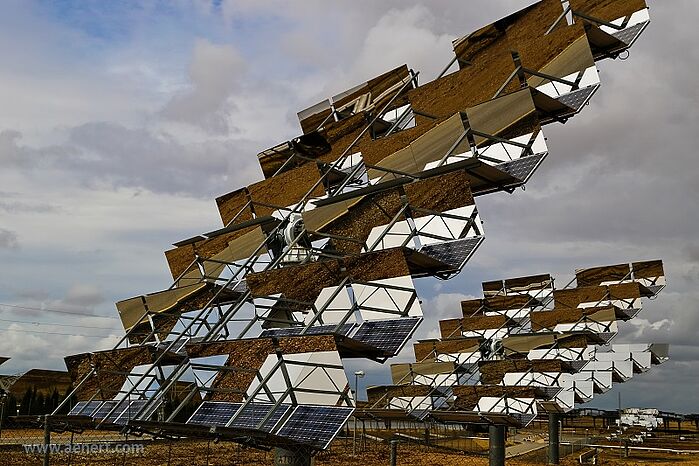 PS10 was launched 15 years ago and has had a great influence on the development of the solar energy industry. All in all, more than 130 Concentrated solar power projects have been launched in the world. Among them are such unique ones as:

Most of the CSP and CPV projects, as well as key statistics for this energy sector are shown on the map below.

Major CSP and CPV plants in the world 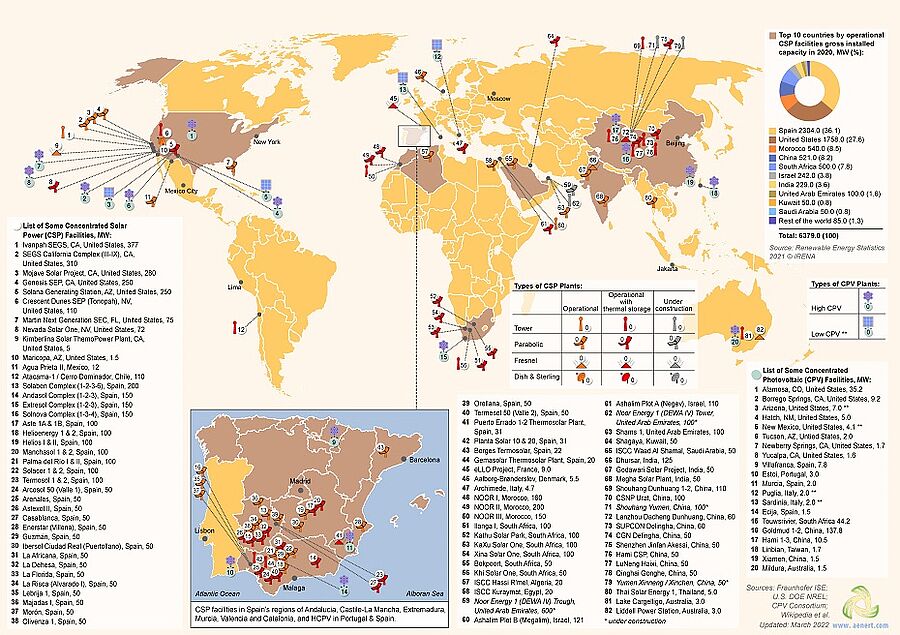 To open the map in PDF format, just click on the link:
https://aenert.com/fileadmin/default/templates/images/Technologies/Renewable_energy/Solar_energy/csp-cpv-maps/csp_cpv_plants_world_map.pdf