Waste generation and treatment statistics in the European Union in 2020 presented by Eurostat reveals that EU‘s all economic activities and households in the EU Member States generated 2 151 million tonnes waste which corresponds 4 808 kg per capita.

Almost two-thirds (64% or 3.1 tonnes per inhabitant) of the total waste generated in the EU in 2020 is classified as major mineral waste, which is mainly waste generated from mining and quarrying as well as construction and demolition.

On the country level, particularly high levels of total waste generated per capita were recorded in Finland, Bulgaria and Sweden. These three countries are at the same time leaders by the share of total waste coming from Mining and quarrying, while elsewhere Construction and demolition often contributed to the high shares as can be seen from the table below. In Finland more than 20 tonnes of waste per inhabitant were recorded in 2020, more than four times the EU average. Hungary, Portugal, Latvia and Croatia are the EU member states that produce the least amount of waste. 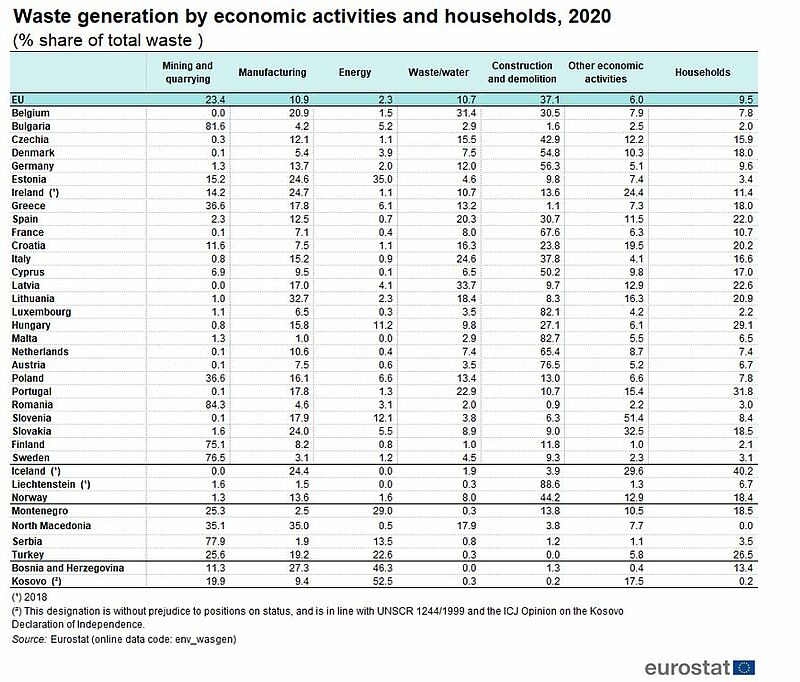 In 2020, about 2 029 million tonnes of waste were treated in the EU. Approximately 39% of waste was recycled and 31% landfilled. Backfilling accounts for about 14.6 % and energy recovery for 6.4 %. There is considerable variation among EU member states in how they use these different treatment methods. For example, some EU member states have very high recycling rates (Italy, Belgium, Slovakia and Latvia), while in others the predominant category of treatment is landfill (Romania, Bulgaria, Finland, and Sweden.