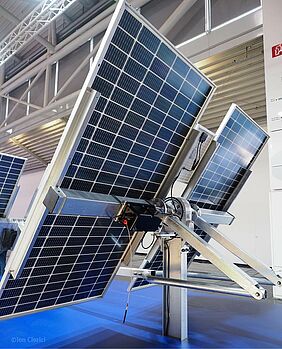 One of the options to substantially increase the efficiency of solar technologies is the implementation of trackers, devices that follow the solar position and correspondingly orient photovoltaic panels or mirror reflectors. There is a multi-level classification of trackers based on their functional capabilities. First of all, passive and active trackers can be distinguished. In the latter case special actuating mechanisms such as electric motors or hydraulic devices are used for mechanical movement of solar elements. Another important classification feature of trackers is the number of axes around which the adjustment can be performed. Here, main options are Single Axis Tracking and Dual Axis Tracking. In detailed sources more specific tracker features are additionally mentioned, for instance, Horizontal Single Axis Trackers or Azimuth-Altitude Dual Axis Trackers.

Employment of solar trackers is an indispensable condition for concentrating solar energy technologies. In this case it is the precise adjustment of parabolic or flat heliostats and concentrated energy receivers towards the sun that ensures the performance of solar power stations of this type in principle. In the last years the employment of solar trackers is being extended in photovoltaic applications as well. According to a number of economic and technological studies, employment of Single Axis Trackers allows the efficiency of solar energy conversion to be increased up to 25% and even to 35%, while for Dual Axis Tracking – up to 40%. In addition, for solar tracker market a yearly average growth of 13-16% is forecasted in the nearest future.

Currently, there are several large manufacturers of solar trackers on the market, having many years of positive operational experience and whose supply rates of various tracking devices amount to hundreds or even thousands. Among them the following should be highlighted: AllEarth Renewables, Array Technologies, Inc., First Solar, Inc., and DEGERenergie GmbH. 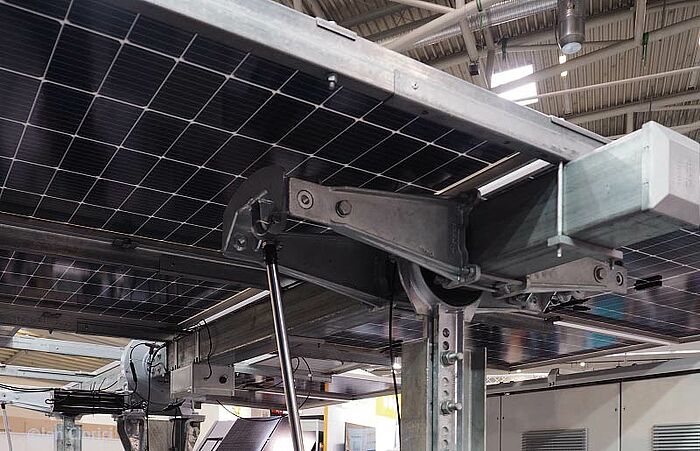 However, use of solar trackers in photovoltaic applications is controversial. Main deterrents here are their high costs and additional maintenance expenses. Solar tracking systems and, particularly, actuating mechanisms are complex and vulnerable structures that require regular maintenance by trained personnel. Often, implementation of trackers can double the cost of solar power plant, thus neutralizing the additional benefits of increased solar generation efficiency. Therefore, presently the use of trackers in the solar power industry is limited, excluding, as mentioned above, concentrating solar power facilities.

Overcoming this barrier in the majority of cases comes down to raising the organizational level of solar power plant management and engineering improvement of solar tracker design. A significant part of effective technical solutions aimed at the development of these technologies is concentrated in patent documents registered with various patent offices. EnerTechUp company performed a systematic search of patent documents on this subject, prepared a unique patent database, and conducted a thorough statistical analysis of the patenting activity results. The database includes about 8 thousand patent documents published in generally-accessible sources all over the world during 1994 and 2021. Statistical analysis of patent documents was performed for a twenty-year period between 2002 and 2021. Results of the statistical analysis are generalized and provided in the patent review.

Countries participating in patenting process. Number of patents obtained by resident applicants in 2002-2021 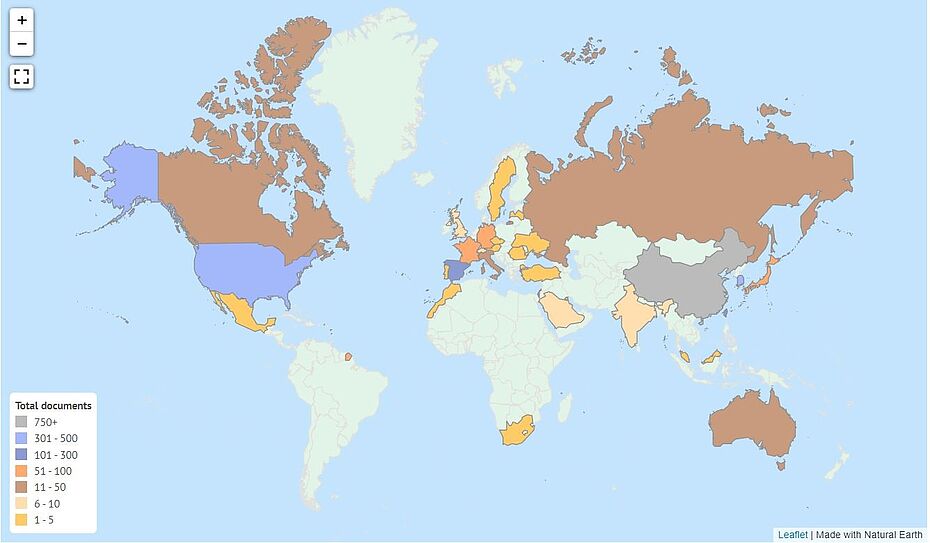 From the list of ten elaborated technology elements, Tracking systems, Flat-panel trackers, Tracker support structures, Dual-axis trackers, and Tracking mechanisms were mentioned in patent documents more than others. Each of them was encountered in at least four out of ten patent documents. Technology elements Concentrating collector trackers, Single-axis trackers, and Sensors were considered in approximately every fifth patent or patent application. Technical solutions related to Maintenance and mounting of trackers and Floating solar trackers were mentioned less often than others.

After comparing the percentage of mentions of each of the elaborated technology elements mentioned above for patents and patent applications published in the last five years, it was established that the share of mentions of Flat-panel trackers has grown more than others, by almost 25%. The registered growth of interest towards Single-axis trackers, Tracker support structures, and Maintenance and mounting of trackers was at a far lower level; noticeable decrease can be seen in the shares of mentions of such technology elements as Concentrating collector trackers, Dual-axis trackers, Tracking mechanisms, and Sensors. 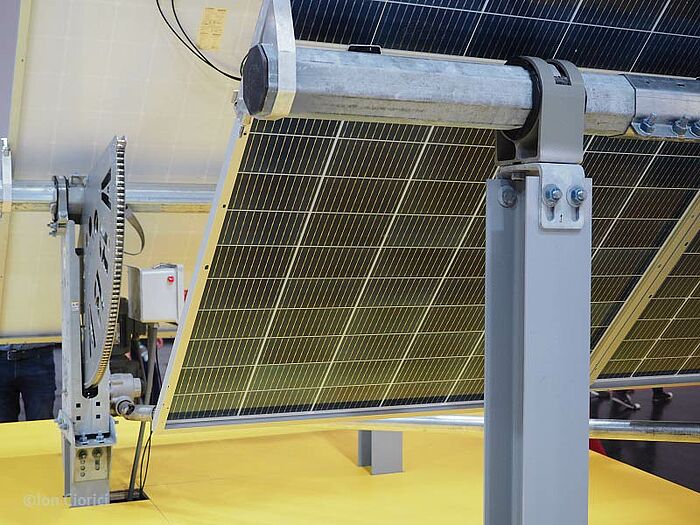 In the years to come a growth should be expected in the number of granted patents related to Flat-panel trackers. This technology element demonstrates a sufficiently high A/P coefficient value (Relationship of number of applications to total number of patent documents by year), and about 60% of patent applications published over the last few years pertain to the start ones i.e., not related to any existing patent family. For Flat-panel trackers the top 10 applicants include the representatives of the United States, China, Spain, France, and Taiwan. The largest number of patents between 2002-2021 were granted to SunPower Corporation.

The invention discloses torque-limiting assembly and method for tracking solar panels. The torque-limiting device is connected to and depends on the drive system (a torque limiting clutch in case of a one-way gearbox; a linear slip device in a push/pull linked tracker; a pressure relief valve in a hydraulic system). According to the claims, in the torque-limiting assembly of the invention “…when a hinge moment force causes a level of torque on the drive system to exceed a pre-set limit the torque limiter passively allows rotational movement of the tracker row in the direction of the torque, thereby allowing the hinge moment force to rotate the tracker row about a pivot axis such that hinge moment is reduced or eliminated as a result of a new rotational position of the tracker row independently of a plurality of tracker rows”. According to the authors, the invention aims to minimize dynamic forces the tracker is exposed to, at the same time allowing for a lighter and cheaper tracker structure. 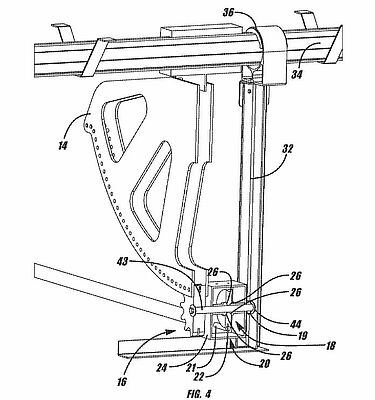 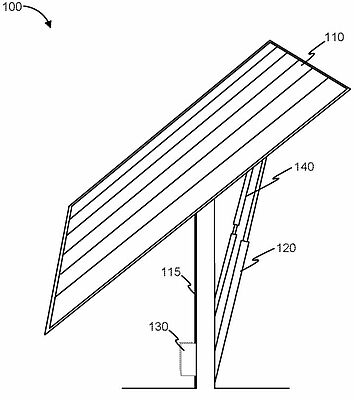 A damping system for a solar tracker is described in the invention. The described damper provides two damping ratios, depending on the loading conditions on the tracker. A chamber, a movable piston inside the chamber, the piston having two ports with the first and second diameters, with the second diameter being larger than the first one; and a valve to open the second port at a first damping rate conditions or close it at the second damping rate conditions. The tracker system is controlled by an actuator and a controller, but the damper transitions from one ratio to the second ratio are independent of the controller. With reference to the prior-art systems, the authors of the invention outline risks of displacement of trackers in heavy weather conditions and increased costs of preventing this issue.

A complete version of the database and patent review can be found at www.aenert.com