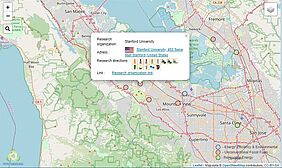 After superconductivity was discovered at the beginning of the 20th century, scientists around the globe have taken great pains to unravel the mysteries of this phenomenon in materials physics. The insights they have gained are profound. However, the exact mechanisms that lie at the bottom of this phenomenon have yet to be fully discovered.

A superconductor is a material with no electrical resistance, which does not allow magnetic fields to penetrate. Therefore, an electric current in a superconductor can be maintained indefinitely. Superconductivity can only be produced at very low temperatures, which poses one of the greatest problems for the widespread application of superconductors. So far, they are used in a variety of devices, ranging from MRI machines to super-fast maglev trains. Researchers are trying to develop superconductors which can work at higher temperatures and thus advance energy transport and storage.

Now (2022), research carried out at the Department of Energy's SLAC National Accelerator Laboratory and Stanford University proved that nickel oxide superconductors, which can conduct electricity with no loss at higher temperatures as opposed to conventional superconductors, contain a type of quantum matter called charge density waves, or CDWs, which in some cases can occur when in the state of superconductivity. Because of the presence of CDWs the scientists assumed that these recently discovered materials, which are also called nickelates, were able to form so-called correlated states, which are "electron soups" that can form the medium for a variety of quantum phases, such as superconductivity.

CDWs are a state of matter frequently occurring in superconducting materials. They form a kind of pattern of frozen electron ripples which are superimposed on the atomic structure of the material, with the electrons having a higher density in the peaks of the ripples and a lower density in the troughs. When the material's temperature and level of doping are adjusted, various states emerge and fade away. Under the right conditions, the electrons lose their individual identities and form an electron soup, and quantum states such as superconductivity and CDWs can emerge.

An earlier study by the Stanford Institute for Materials and Energy Sciences (SIMES) had not found CDWs in nickelates. However in this study, the nickelates had contained the rare-earth element neodymium. In this latest study, the SIMES team designed and analysed a different nickelate material where neodymium was replaced with another rare-earth element, lanthanum. Since then, SIMES researchers have explored the electronic structure of the nickelates, which is how the electrons behave, and magnetic behaviour. These studies were important because they highlighted similarities and subtle differences between nickelates and the copper oxides or cuprates which are the first high-temperature superconductors that were discovered and still hold the world record for high-temperature operation at everyday pressures.

On the other hand, the scientists expected certain similarities in the behaviour of nickelates and copper oxides, as nickel and copper are right next to each other on the periodic table of the elements, and also suspected that nickelates might be good superconductors. However, it turned out to be extraordinarily difficult to construct materials with just the right characteristics.

The scientists conducted experiments at three X-ray light sources—the Diamond Light Source in the UK, the Stanford Synchrotron Radiation Lightsource at SLAC and the Advanced Light Source at DOE's Lawrence Berkeley National Laboratory. The specialized tools offered at each of these facilities gave them the opportunity to probe and understand the material at a fundamental level.

Scientists have sought to get to the bottom of the functioning of nickel superconductors for many years. In 2021, scientists analysed the ground state properties of a two-band model on four-leg cylinders in infinite-layer nickelates using the density-matrix renormalization group (DMRG), a numerical variational technique for obtaining the low-energy physics of quantum many-body systems with high accuracy. At half-filling, the ground state of the system was found to be consistent with a Luttinger liquid, a theoretical model describing interacting electrons (or other fermions) in a one-dimensional conductor, having quasi-long-range charge and spin correlations in the R layer, but short-range correlations in the Ni layer. At a hole doping concentration of δ=12.5%, the R layer was almost empty and the ground state of the system was consistent with a Luther-Emery liquid, a state of matter that is predicted to occur in one-dimensional systems of interacting fermions and is characterized by a gapless charge spectrum and a gapped spin spectrum, where the scientists found power-law superconducting and charge density correlations in the Ni layer, but exponentially decaying spin correlations. The results of this research was an important step towards unravelling the microscopic mechanism for pairing in these nickelates and other unconventional superconductors.

Image: Schematic plot of the two-band Hubbard model, charge density proﬁle and correlation functions at half-ﬁlling. a The schematic two-band Hubbard model on square lattice geometry, where tNi and t1Ni represent the nearest-neighbour(NN) and next-nearest-neighbour(NNN) hopping within the Ni layer, respectively. tR is the NN hopping within the R layer, and tNi−R is the hopping between the two layers. b-c Charge density for ε0R-Ni = 3.7 and ε0R-Ni = 3.4 at half ﬁlling. d-f Correlation functions measured on the Ni and R layers, respectively, for ε0R-Ni = 3.4 at half ﬁlling. The power-law ﬁtting functions are represented by dashed lines 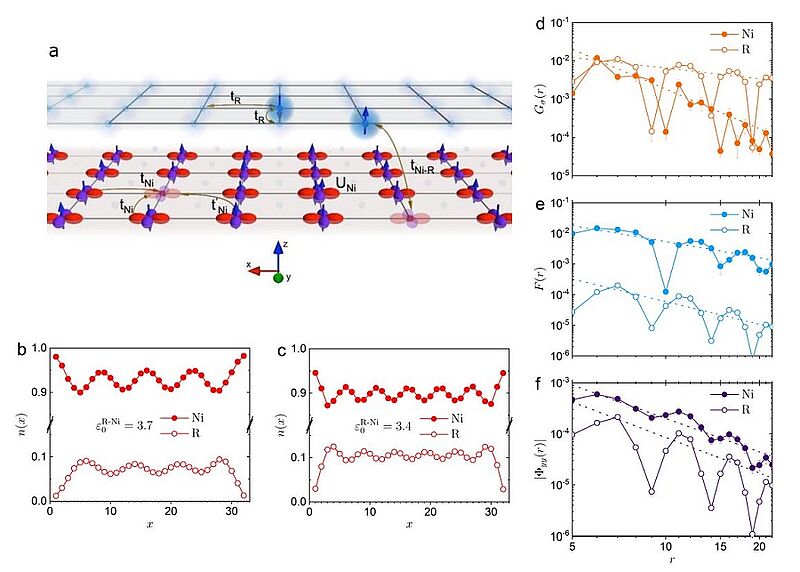 In 2022, scientists researched the superconductivity in infinite-layer Ca-doped LaNiO2 (La1−xCaxNiO2) thin films and built their phase diagram. Unlike the metal-insulator transition in neodymium- and praseodymium-based nickelates, the undoped and underdoped infinite layer nickelate thin films La1−xCaxNiO2 were entirely insulating from 300 K to 2 K. A superconducting dome was observed to form at 0.15 < x < 0.3 exhibiting weakly insulating behaviour in the overdoped regime. Moreover, the sign of the Hall coefficient RH, which is the production of a voltage difference (the Hall voltage) across an electrical conductor that is transverse to an electric current in the conductor and to an applied magnetic field perpendicular to the current, was seen to change at low temperature for samples with a higher doping level. Still, the RH-sign-change temperature stayed at around 35 K as the doping increases. The results also showed a notable role of lattice correlation on the multiband structures of the infinite-layer nickelates.

The benefits of the insights gained would be enormous: fully harnessing the power of nickelate superconductors, would be a revolutionary development, leading to perfectly efficient power lines, for example, maglev trains and a series of other futuristic, energy-saving technologies. Therefore, nickelates certainly are a very interesting system for research in order to find out how the quantum phases in nickelates compete or intertwine with each other.

The experiments showed that the nickelate, which was researched in the study, could have both CDWs and superconducting states of matter at the same time and further that these states existed even before doping of the material was performed. This was a surprising revelation, as the scientists had previously assumed that doping was an essential part of getting materials to superconduct. It stands to reason that this will have great bearing on further research in the field of superconductors as well as advance the their components.