Qatar, the official name – The State of Qatar, is a country in the Middle East with its capital in Doha. The country borders Saudi Arabia (in the south), has sea borders with Bahrain (in the north-west), with the United Arab Emirates (in the south-east), and is also washed by the waters of the Persian Gulf.
According to 2022 statistics, Qatar, which in terms of size is placed 164th in the world, is home to more than 2.5 million people.  In terms of population density, the country is 59th in the world from 248 countries considered [1,2,3]. The length of the coastline is 563 km [3].
The political form of government is absolute monarchy, the official language is Arabic. The administrative map of the country is divided into 8 municipalities [3].
Oil and gas resources are the main source of income and economic growth of Qatar [3], which is reflected in Figure 1. For the majority of indices the positioning of the country is higher than the world average, in the top half of the graph, and for 4 indices in the top quarter of the graph (i.e. among 25% of the best countries in the world included in the rating).

Qatar has one of the world's highest GDP per capita, as well as annual GDP growth. Nevertheless, the level of high-tech exports is relatively low.
From the beginning of 2000 the country has experienced sustained GDP growth in purchasing power parity, which decreased in recent years and reached the level of $245.6 billion (62nd place in the world) in 2020 [3,4]. The country’s GDP at purchasing power parity per capita showed decline over the past few years, and in 2020 amounted to $85 300 (6th in the world), dropping from $134 200 in 2015 [3,5].
The level of inflation changed from 2.7% in 2016 to - 0.6% in 2019; in terms of this indicator the country was 11th in the world (ranked by levels of inflation, smaller to larger) [3].
According to The Global Competitiveness Report 2019, presented by the World Economic Forum, Qatar was 29th (out of an estimated total of 141 countries), behind a number of European countries but ahead of, for example, Saudi Arabia. This rating reflects the effectiveness of the use of the country’s own resources for sustainable development. In addition to a number of economic indicators this index also takes into account such variables as education, health, level of innovation, etc.
In the list of 134 countries that exported high-tech products in 2019-2020, Qatar was 61st, below the world average. According to the Index of Economic Freedom 2021, which is based on freedom of business, freedom from government action, property protection, and freedom from corruption, the country was considered «mostly free», 31st out of 178 countries. In terms of gold reserves and foreign exchange reserves in 2017 Qatar was 68th. The country's public debt in 2017 amounted to 53.8% of GDP, which is close to the world average (Figure 1).
According to Standard & Poor's rating in October 2018, the country was rated as АА - «very strong» - «…the issuer has a very high ability to pay interest on debt obligations and debts themselves».
Qatar Gas Transport Co Ltd (Nakilat) Q.S.C. is included in the rating of the largest energy companies, according to S & P Global Platts 2021 Top 250.

For more information on the economy of Qatar see the attached link library by clicking here.

Qatar's share in the global volume of proven oil reserves is 1.5%, and gas – almost 12.5% [6]. Qatar is an active participant in the organization of oil exporters (OPEC), where the share of its reserves is 2.1% of the total reserves of the participating countries [7].
Qatar’s total primary energy supply (TPES) is composed of fossil fuels – oil and gas, with the share of oil being just over 33.5% in 2017 according to [8].
Due to its geographical position Qatar has quite good reserves of such renewable energy sources as solar and wind. A selection of basic indicators of this type of resource is presented in Table 2.

*for the majority of the territory of the country

The level of direct solar irradiation for the majority of the country is 5.5-6.0 kWh/m2/day [9], which is an excellent resource for the production of solar energy, both using photovoltaic technologies (PV) and by means of a concentrator (CSP).
The distribution of wind resources is as follows: for the majority of the country the wind speed is 5.0-6.5 m/s, and in the west of the country in the municipality of Al Jumayliyah it can reach 7.0-7.5m/s at the height of 50 metres [10]. It is also a decent resource, which remains practically unused.
About 5.6% of the territory of Qatar was covered by agricultural land in 2018 [11], and this has been increasing slightly over the last half century; there is no forest in the country [12].
The level of generation of municipal waste in Qatar, 1.27 kg per capita per day, is lower than, for example, in Saudi Arabia (1.4 kg per capita per day), and higher than in Morocco (0.55 kg per capita per day).  An increase of up to 1.7 kg per capita per day is predicted by 2025 [13].

A detailed list of sites and special reports on the energy resources of Qatar can be found here.

Figure 2. The production and consumption of fossil fuels in Qatar (left – coal, in the center – gas, right – oil)

Natural gas production and consumption grew steadily and in 2019 amounted to 5914 Bcf and 1331 Bcf, respectively [14]. According to the BP Statistical Review of World Energy 2022 [6], gas production in 2021 was 177 Bcm, while consumption was 40 Bcm. According to OPEC [15] in 2017, natural gas production volume was at 163.6 Bcm, and 128.6 Bcm was exported, i.e. almost 79%.
In terms of this indicator, Qatar has been the second largest exporter in the world after Russia, and the world's largest exporter of LNG since 2006. LNG is exported from Qatar mainly to Asia (72%) and Europe (23%) [16].
Gas is also supplied to Oman and the United Arab Emirates via the Dolphin pipeline, which has a capacity of 3.2 Bcf/day [16].
Qatar almost completely relies on fossil fuel resources for electricity production (Fig.3).

According to the U.S. Energy Information Administration the country produced 46.89 TWh of electricity in 2019 where fossil fuels accounted for 99.9%, renewables – 0.1% (Fig.6).
Qatar’s position in the comparative diagram of energy index is shown in Fig. 4.
Qatar is in the list of countries with the best ratio of production/consumption of oil and gas, ranked from higher to lower values.
In another rating – the list of countries for the production of electricity from renewable sources (excluding hydropower), Qatar was 162nd out of 170 countries in 2017, behind a great number of countries, but ahead of the UAE.
Qatar is ranked 116th, behind Kuwait in the EAPI of 2017 (Energy Architecture Performance Index), which is based first on the level economic growth, environmental safety, and energy independence of the country, including access to energy. Over the last 8 years the country has gained 11 positions in the rating.

More information about the energy balance of Qatar can be found in the documents from our reference library here.

A territorial map of the distribution of the largest infrastructure projects of the fossil-fuel sector in Qatar is shown in Figure 5.
As previously mentioned, the proven reserves of gas account for 86.2% of proved fossil fuel resources, oil – 13.8% (Fig.5).
The world's leading offshore gas field is the North Dome (North Field), located in the northeast of Qatar’s continental shelf, which, according to Qatargas, accounts for 18.5 billion standard cubic feet per day [17]. The country's gas system is represented by 3 gas compressor stations, as well as 14 LNG export terminals operated by Qatargas and RasGas; the maximum capacity of the six largest terminals is 7.8 MTPA [18].
There are two GTL plants operating in the country, Qatar Oryx (operated by QP and Sasol-Shevron GTL) with an installed capacity of 30,000 barrels per day and Pearl GTL (QP & Shell) with an installed capacity of 140,000 barrels/day, which produce liquid hydrocarbons from natural gas [19]. Transportation of gas, condensate and gas condensate within the country is carried via a network of pipelines with a total length of 2383 km, 288 km and 221 km, respectively (Fig. 5). 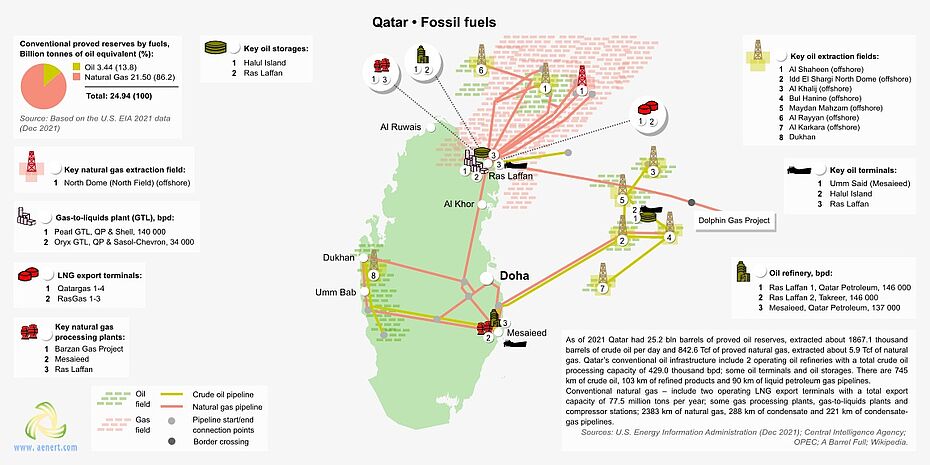 Figure 5. Basic Infrastructure facilities of the fossil fuel sector and electricity in Qatar

North Oil Company is developing the world's largest offshore oil field, Al Shaheen, located 80 km north of Ras Laffan, production is carried out at 33 platforms from 300 wells, with 300,000 barrels of oil currently per day [20].
In 2016 Qatar refineries had a total installed capacity of 429 thousand barrels/day, the largest, RasLaffan 1 and RasLaffan 2 have an installed capacity of 146 000 bbl/day [21] (Fig.5). Crude oil and petroleum products are exported via 3 oil terminals, and crude oil, petroleum products, and LNG are transported via pipelines with a total length of 745 km, 103 km, and 90 km, respectively (Fig. 5).
The map of the territorial distribution of Qatar’s largest infrastructure facilities for electricity generation is presented in Figure 6. 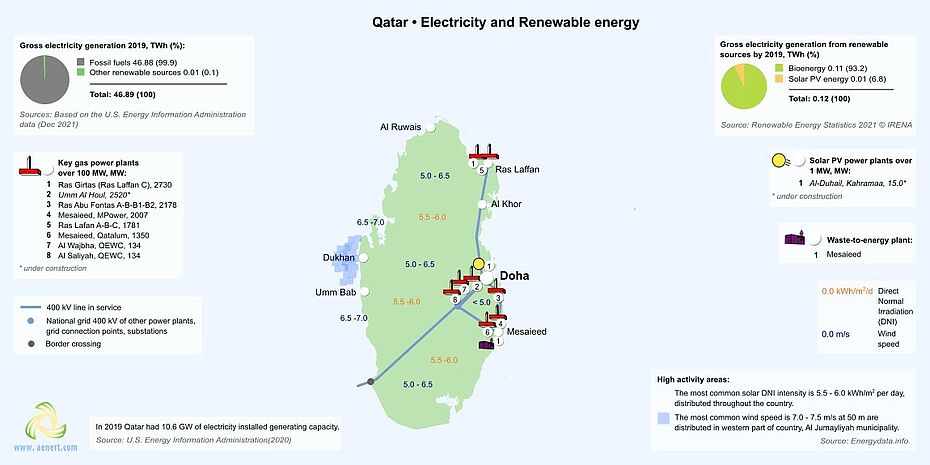 According to the Central Intelligence Agency, the share of fossil fuels in energy production in Qatar in 2019 was 99.9% (Fig.6).
Most of the electricity is generated at gas power plants (Fig.6), the largest of which is Ras Girtas, with an installed capacity of 2.730 MW [22].
As already noted the potential of Qatar’s renewable energy is not sufficiently used and has only a 0.1% share in electricity production. Nevertheless, the Solar PV Power Plant Al-Duhail is being completed near the capital, which will have a capacity of 15 MW [23], and a tender for the construction of a 500-MW solar photovoltaic (PV) plant in the Al Kharsaa area was announced in May 2018 [24]. In addition, Al Wakrah has a Mesaieed Incineration Plant, which can process 500,000 tons of waste per year and has an installed capacity of 50 MW [25].

For current information on the development of energy in the country see here. More information about Qatari energy infrastructure is also available here.

Additional information about education in the country can be obtained here, and the list of research institutes here.

The diagram of environmental indices presented in Figure 8 to some extent reflects the ecological situation in the country, which in the case of Qatar is quite negative.
First of all, the country demonstrates a relatively high level of CO2 emissions in general and per capita. It is also necessary to note the high level of methane emissions in the country.
In 2020, due to the lack of forests in relation to the total area of the country, Qatar was 23nd in the world out of 234 countries, and according to the indicator related to the change in forest area, from 2010-2020, the country was 145th in the world.

Also, the country is well positioned in the Environmental Performance Index (EPI) 2020, focused primarily on the environmental activities of national governments, aimed at reducing the negative impact of the environment and the rational use of natural resources. In this ranking, the country is 87th out of 180 participating countries.
Finally, it is worth mentioning that according to the Ecological Footprint Atlas rating Qatar is among a number of ecological debtors.

For more information on the energy complex of Qatar see the attached link library by clicking here.